CAs you already know, WOCU Monitoring is a product in which we are continuously working to improve its functionalities and features.

So we would like to share with you the new features included in release 0.33 of our monitoring solution.

We have worked a lot on the stability of the solution, gaining performance in queries to the data backends in order to obtain a better user experience and support realms with a greater number of hosts.

On the other hand, important visual changes have also been made to the interface, such as the grouping of the problems tab in a single page or the visualization of performance metrics from the host or service modal itself.

And last but not least, report scheduling has been implemented, allowing the execution of reports on the date defined by the user and the notification of the results.

Here are the changes in this version:

Functionality which allows to click on the global status widget of each realm and go to the assets page applying the corresponding filter. This will result in greater agility on the part of the operator to examine the devices of a given status.

A new tab has been added to the host modal and service modal to present the PNP metrics of a host or service.

Unification of the Problems tab

Downloading CSV and JSON in Problems and Events

The increase in performance and reliability obtained by using a centralized Mongodb-based backend for the storage and management of all monitoring events has made us decide to change the default architecture for all installations.

Improvements in the internal cache for data requests

The internal cache system for data requests has been substantially improved, so that requests that use dates as arguments are also cached.

An improvement has been introduced in the "Top Hosts" report allowing the user to list the entire set of records obtained in the result of the report execution. This will be of interest to you if you have realms with many devices.

Link to Host and Service modes in Availability reports

A link has been added to each entry in the hosts and services table of the Availability Report, which redirects the user to host or service modes respectively. 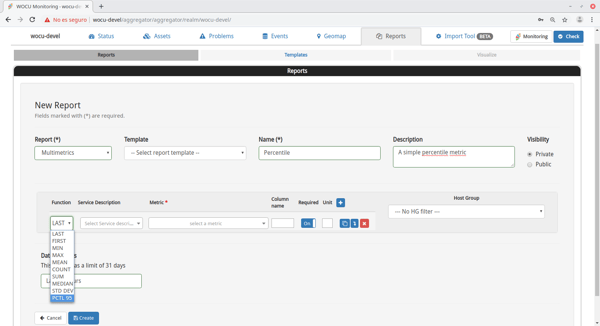 In order to automate the operation of wocu reports, the possibility of scheduling them has been added. With this new functionality, you can schedule the launching of a report on a certain date and with a certain frequency. In addition, the scheduling flexibility is very wide and can be adapted to almost any need.

In the section where the reports are listed, specifically in the actions, a button has been added to schedule that report:

A new field has been added to the hostgroups form that allows you to define which BP hosts will be part of a specific hostgroup.

Added the possibility to use names in the configuration of the "address" field of any host, this makes it easier to monitor assets referenced by name instead of ip address.

In order to keep WOCU's Device information complete and up to date, the Only scan active and pending assets field has been added to the CSV_Import task.

A new pack called networkdevice-traffic-sum has been created to show the sum of traffic carried by a group of interfaces of the same device. The pack is especially useful to obtain the top traffic reports per device instead of per independent interface.

In order to increase the visibility of the monitoring servers, we have extended the installation of the internal Collectd daemon to all the platform components. This will allow us to generate performance graphs of all monitoring equipment automatically.

We hope you find these changes useful and interesting.

At A3Sec we have always tried to be very close to those responsible for...

What is Threat Hunting?

For a long time, and still today, many entities have had and still have a...

2018 was a year where we witnessed firsthand the alarming escalation of...

Monitoring enterprise IT infrastructures is essential to ensure that business...

As mobile devices have become one of the main working tools, they have become...

One of the main reasons why a company uses a monitoring solution such as WOCU...

We live in a digital era where business processes are carried out through apps...

According to a study conducted by the Harvard Picture Review on whether data...